So Lamar Jackson who is running away with the NFL MVP award decided it would be nice to gift his linemen Rolex’s. Seems really nice right?

Well a reader of the Baltimore Sun named Karen did not think it was so nice from Lamar. 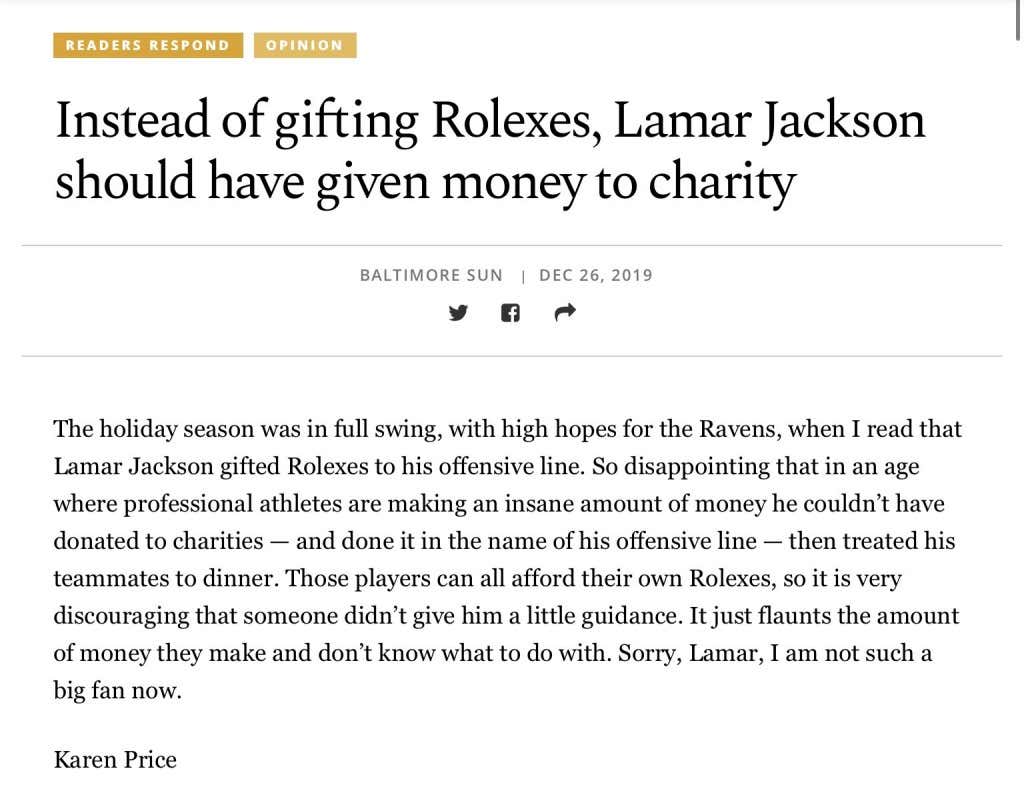 The Sun – The holiday season was in full swing, with high hopes for the Ravens, when I read that Lamar Jackson gifted Rolexes to his offensive line. So disappointing that in an age where professional athletes are making an insane amount of money he couldn’t have donated to charities — and done it in the name of his offensive line — then treated his teammates to dinner. Those players can all afford their own Rolexes, so it is very discouraging that someone didn’t give him a little guidance. It just flaunts the amount of money they make and don’t know what to do with. Sorry, Lamar, I am not such a big fan now.

I don’t even know where to begin here. I like how she said shes “not a such a big fan now”. Karen seems like the worst type of person. Instead of saying nothing or just appreciating a nice deed from what seems like a great guy, she has to find a way to shit on Lamar’s parade. And if you look at how much Lamar is actually making this year? It’s about $500,000 after taxes which is a lot of money but not a lot of money for an NFL MVP. And even with that Lamar has donated to charity! He’s  donated $25k to Blessings in a Backpack to provide 400 impoverished elementary school students with food to take home over the weekend so that they’re not starving when they show up to school every Monday. He’s also donated his time to the Baltimore Boys & Girls Club to support their mission and give life advice to youngsters who have been dealt a tough hand in life. He’s gone to Baltimore Juvenile Delinquent Centers to speak to kids who have maybe made some poor choices and encourage them to turn things around. So yeah Karen, jokes on you.