We’ve seen Holly Sonders before who was dating Arizona Cardinals head coach Kliff Kingsbury. Well, now she’s dating a professional gambler named “Vegas Dave” who is known as somewhat as a scam artist. And that’s according to TMZ: 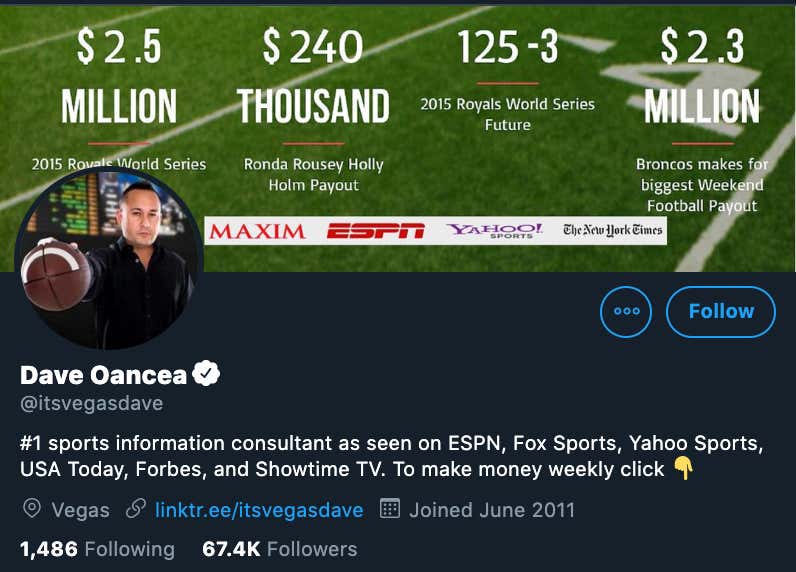 He’s controversial in the gambling community because many people consider him a scam artist. Is that true? I am not sure. But that’s his reputation.

There goes any respect I ever had for Holly Sonders. Your boyfriend is a vile, scamming, gross, POS that should be in jail and will deserve every bad thing that happens to him courtesy of karma. Gross https://t.co/Q1T6uUBiaj

According to The New York Post he’s had some trouble with the law as well:

Prosecutors had accused of Oancea of using other people’s social security numbers to conceal winnings totaling over $1.2 million from the federal government. With each of the 19 charges carrying sentences of five years, he was looking at a theoretical 95 years in prison.

Vegas Dave will doubtless be relieved to avoid prison, but Dorsey’s final order — that he must stay out of sports books in Nevada for three years — might seem like a life sentence for a man who describes himself as “one of the elite sports handicappers of this era.”

Anyway’s who knows if he is or is not a scam artist. But seems like he might be somewhat of a shady character. Either way, he is a tremendous marketer and a pretty lucky dude to be hanging with Holly.

Guess what we were filming last night in LA? ??????@itsvegasdave

All white except for the Birkin ?????? @itsvegasdave

Who else ended up at two strip clubs and Tao on Thanksgiving? ????? Photo by: @collinstark

Always down for a good jaywalk

Casual Saturday w this rain in LA. Tell me below who you’ve got winning in all CFB matchups today

@tmz_tv caught up with us in Beverly Hills the other day. Even when it’s our day off @itsvegasdave are still working. Business never stops. You may not know much about us yet but hard work is the foundation of who we both are. Comment below and tell us what your hustle is! ???