The Predators secure the 2nd seed in the playoffs and welcome the Dallas Stars. The Preds and Stars both finished with nice finishes to the season following injuries that plagued both teams throughout the regular season.

The Predators lead all playoff teams with 542 slapshots taken in the regular season, which correlates directly with their defenders scoring 43 goals and contributing 197 points to Nashville’s success. The Predators will have P.K. Subban, Viktor Arvidsson, and Filip Forsberg all in the fold for this playoff series and will hope to take advantage of the health they have for a run at the Cup.

The Stars have been successful via 2nd best overall goal-tending in the league only allowing 200 goals all season and Ben Bishop’s .934 save percentage leading the NHL. The Stars also have an excellent penalty kill which pairs nicely with the lack of success that the Preds have on Powerplay.

The Predators and the Stars have very similar strengths, but the Predators’ strengths are stronger than the Stars. The Stars just don’t have the ability to score like the Preds do. 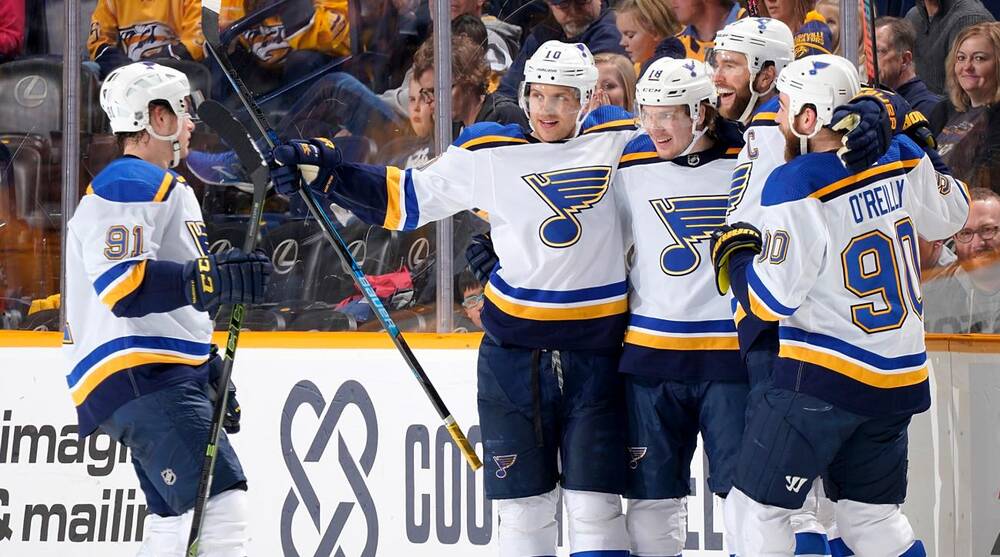 Winnipeg hopes to shake of their end-of-season rust that cost them their division while the Blues hope to remain white-hot into the postseason and shake off postseason failures that have plagued the team for nearly a decade.

The Jets hope that Josh Morrissey’s return will help solve their late season woes and that the duo of Josh and Dustin cleans up their league-leading 33.4 shots on goal per game. What they lack on defense they make up for on the offensive side with the 5th most power play goals in the NHL this season converting on 24.8%.

The Blues won 23 of their last 33 games and were the second-best team during that stretch right after the Lightning. The Blues catapulted from their rookie goalie Jordan Binnington who had a .926 save percentage in 32 games.

The Jets’ ineptitude on defense does not look good heading into the playoffs and I’m a firm believer in Binnington and believe he wins a playoff series his rookie year. 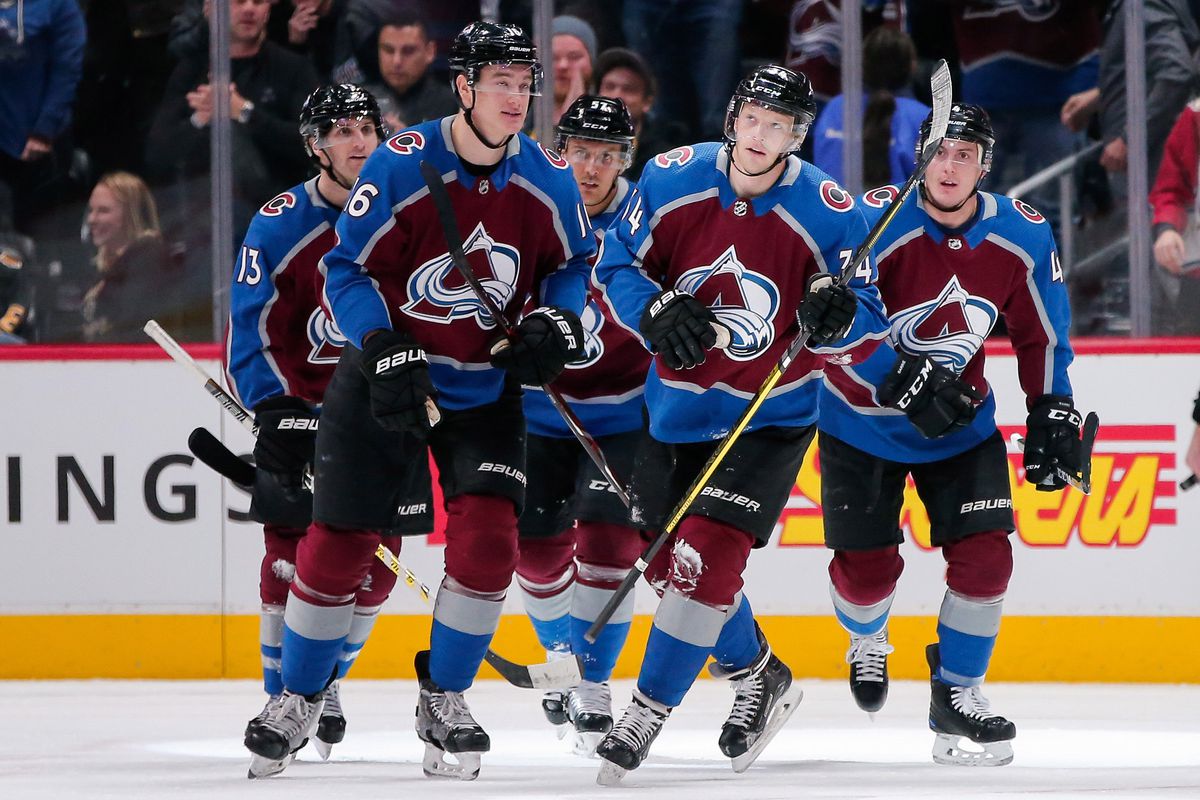 The best team in the West squares off against the last team to make into the NHL Playoffs. Johnny Hockey almost scored 100 points for the Flames this season and was one of five players with 70+ points for the Flames. The Flames were tied for 2nd in the NHL with goals scored with 289. The only weakness of this Calgary team is goals allowed where Mike Smith got the start for the series. Neither goalie is ideal and against Colorado who can score willy nilly, it may be the difference in the series.

One of the youngest teams in the NHL snuck into the playoffs for the second year in a row behind a very strong finish to the season with Grubauer going 7-0-2 down the stretch. It almost makes up for the 18 losses in 21 games suffered from December to February. This is the team with arguably the best starting line in hockey of MacKinnon, Rantanen, and Landeskog scoring 106 goals and contributing 261(!) total points to the Avs cause this season.

The Calgary owned the regular season record against the Avs, but playoff hockey is a different monster. The Avs are hungry to try and establish a potential dynasty with the young great team they currently have. The goaltending of Calgary isn’t good enough to go very far in the Stanley Cup playoffs, so their first stop may be their last. 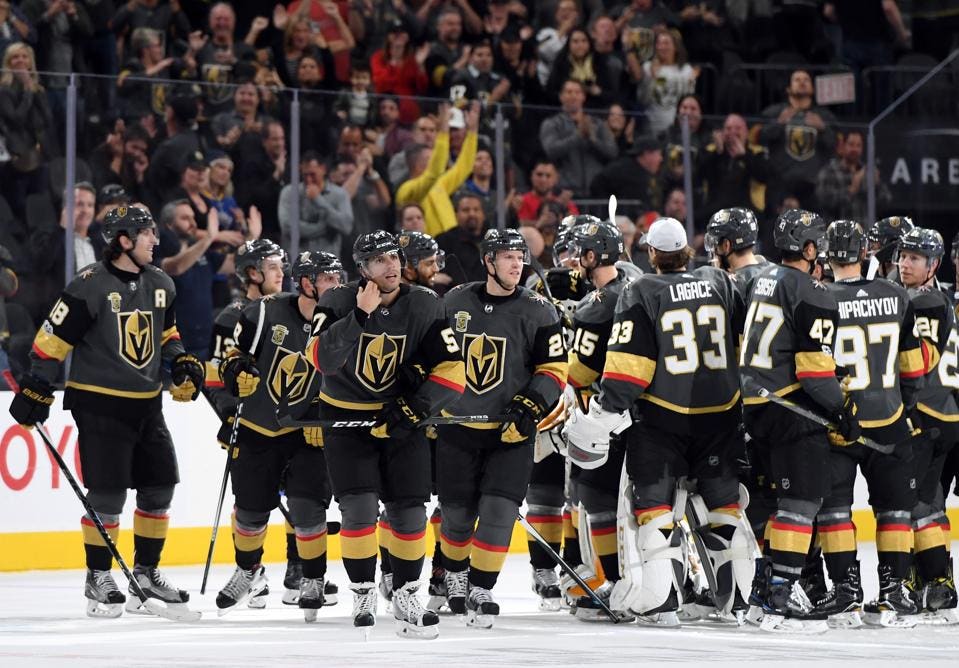 The Stanley Cup runner ups have shown that their success wasn’t just a flash in the pan and the Sharks maintain their constant regular season success with a high volume of goal scoring. The Golden Knights look to knock the Sharks out of the playoffs for the second year in a row and the Sharks look to change the script.

The Sharks were tied with the Flames for 2nd most goals scored in the NHL this year (289). Offense is not the issue so much as horrid goaltending for the Sharks. The save percentage for the Sharks were not successful and were under .900. They will have to rely on their defenders to deflect and or block shots if they hope to make it into the second round this year.

The Golden Knights come in averaging 34.3 shots per game and is 2nd in the league in that category. The Knights also lead the league in turnover differential with 1.2 takeaways for every giveaway. If the Knights play their game the way they’ve been playing all year, they will have no issue dispatching the Sharks for the 2nd time in their franchise playoff history.

With the style of play that the Knights play, it will be nearly impossible for the Sharks to come out of this series with a victory. If someone were to write a book on how to beat the Sharks, they’d put down puck control, and shots on goal. Things that the Knights EXCEL at.

One of the best teams in NHL history licks its chops hoping to rewrite the narrative that has stuck to the Lightning with constant disappointment in recent playoff years. The Blue Jackets are here to surprise everyone.

The Lightning tied the record for most wins in an NHL season (62), scored 319 goals (more than 2nd place by 30 goals), led in Power Play goals (74), power play percentage (28.2%), power play kill (85%) and so many other categories and are the favorites to win the cup for a reason. They were an absolute juggernaut throughout the season and the only thing going against them really is their history of bad playoff performances.

Even though the Blue Jackets have been a way different team since the trade deadline and have found themselves surging into the playoffs (7-1 in final eight games), the Lightning are just too good to overcome this year.

A rematch of last year’s first round, this matchup will hope to replicate the back and forth 7 game series we got last year where Boston almost dropped a 3-1 lead. This year both teams scored 100+ points and Toronto is looking to bring the cup back to Canada for the first time in a hot minute.

The Bruins look to continue their successful matchup against the Maple Leafs which in the regular season ended in a 3-1 record with a goal differential of +6 in 4 games. Brad Marchand was top 5 in point leaders this season with 100 points and could prove to be too much for Toronto with his Bergeron and him on the ice together.

Toronto put together a solid season scoring 286 goals (good for 4th best in the league) and look to win their first playoff series in 15 years. Last year their star center Auston Matthews was a no-show and looks to bring back his A-game for this series.

Ultimately, Boston (other than maybe Tampa Bay) was the last team that Toronto wanted to draw in the first round because Boston is always way more physical than the Maple Leafs can handle, and I don’t see the Leafs turning around what occurred in the regular season against this season Boston team.

The defending Stanley Cup Champions will square off against the underdog Carolina Hurricanes in this opening round and the Hurricanes hope to take their recent strengths and see if they match the Capitals.

Same story, another year for leading goal scorer Alex Ovechkin (51 goals) along with his posse of T.J. Oshie, Jakub Vrana, Nicklas Backstrom, Brett Connolly, Tom Wilson, and Evgeni Kuznetsov who scored 25, 24, 22, 22, 22, and 21 goals respectively. This volume of scoring was good enough for 5th in the NHL this season at 274 total goals but might have been better with less isolation scoring from the Capitals. Regardless, this team is just as dangerous to lose in the first round as any other year, and just as dangerous to win the cup as last year.

The Hurricanes led the NHL in shot differential at +479 shots on goal which was almost 70 more than the next team. The Hurricanes play a very possession-based offense and are great at getting the rebounds. The Hurricanes hope to have some insider information from Justin Williams who played for the Capitals from 2015-2017 and has three rings to motivate the Hurricanes’ locker room.

If the Hurricanes can maintain the puck, slow down the Caps’ isolation scoring, improve their shooting percentage, and outduel the Capitals in shooting and save percentage, they could beat the Capitals. However, following last years’ run, I don’t see the Capitals choking in the first round to a wild card team that they are better than. 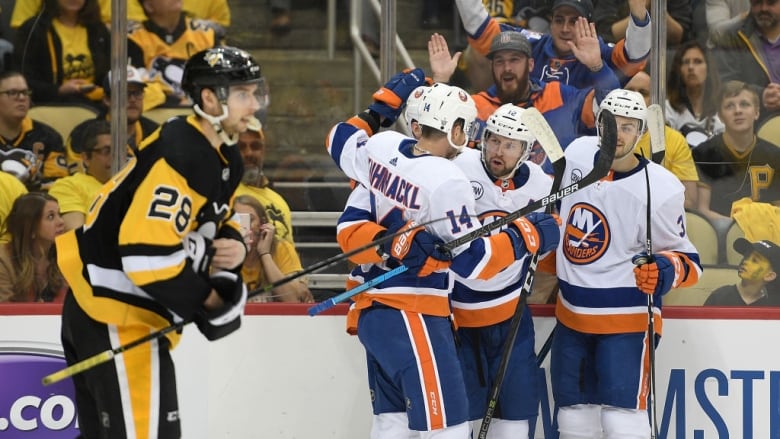 In a surprise turn of events, the Islanders will have home-ice advantage against the Penguins and will look to slow down Sid the Kid’s success following the Penguins 13th consecutive playoff appearance.

The Islanders were 2nd in the league in blocked shots and 29th in the NHL in shots on goal per game. What does this mean? It means that the Islanders control the puck and play slower hockey. The Islanders are fine with the other team out shooting them because both of their goalies were top 5 in saves per game and save percentage this season (yes, I said BOTH of them) and only allowed 191 goals this whole season (tops in the NHL).

The Penguins are the usual offensive force that they are every year, but this year were a lot more physical leading the league in hits per game (28.8) which is astray from the usual finesse style we see from the Penguins. Maybe that’s just the change they needed to contend for a Cup again.

The goalie duo of Thomas Greiss and Robin Lehner should be enough to convince me that the Islanders should edge out the Penguins. However, it is nearly impossible for me to bet against Crosby in the first round and I believe that this Islanders team cannot handle the Penguins power play.