The NBA is the gift that keeps on giving. Fun story lines and inflated states have helped a bunch of different records fall this year. Some are individual, some are team records and other are just hilarious that barely make them true. We know many of these records will be broken again, which is a great representation of the sport’s progress. And some of these records may stand for decades, and that’s just a sign that we’re witnessing history. So without further ado here are 45 different records broken this NBA season.

Most three-pointers made and attempted

NBA teams averaged 10.5 made threes and 29 attempted threes per game, once again surpassing last year’s record of 9.7 makes and 27 attempts. In the 21 seasons since the league ended its experiment with a shortened three-point line, the number of threes attempted has risen or remained the same 20 times. These figures will keep rising for the foreseeable future.

The league set this record last season when 10 players broke the 50-point plateau, and it happened again this year. There were 13 such games in total, with James Harden being the only one to record multiple 50-point games. (He had four.)

Effective field goal percentage equalizes the point value earned on two-pointers and threes, and so this just shows that teams are expected to score more points for any given shot than any other time in league history.

One more league-wide trend, and one that Rockets general manager Daryl Morey thinks will reverse.

“The choice away from that has been a mistake by the league,” Morey told me last week. “So that’s one that I would say that won’t continue to trend down.”

Houston attempted 3,470 three-pointers while taking just 3,436 two-point attempts, becoming the first team to ever shoot more outside the arc than inside.

Most combined three-point attempts in a game: 94

The Rockets faced the Chicago Bulls, with the teams combining for 94 total attempts. Houston went 18-of-57 while the Bulls attempted to match them with 8-of-37 shooting. It obviously didn’t work, but hey, this record won’t last long — someone will be breaking it again.

Most three-point makes by a rookie in a season: Donovan Mitchell (187)

Most three-point makes off the bench: Wayne Ellington (227)

Ellington’s reinvention as an incredible three-point sniper has been so fun to watch, and he did it virtually all year off the bench for the Miami Heat. It also set franchise record for Miami, and broke Eric Gordon’s 206 made threes off the bench, set while on the Rockets last year.

Most individuals with a triple-double: 31

The previous record was 26, something that happened several times in the past decade. The triple-doubles this season ranged from James Harden to Terry Rozier, and from Giannis Antetokounmpo to T.J. McConnell. 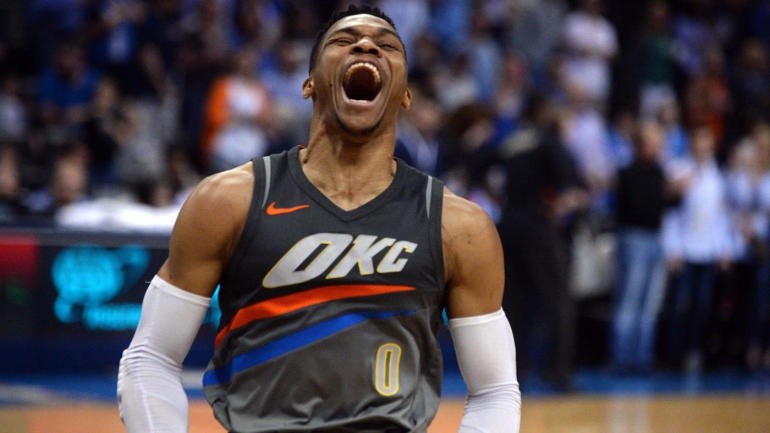 Westbrook even set a career-high in rebounds during his final game, just to be sure.

Oldest player to average a triple-double for a month: LeBron James (33)

James averaged 27.0 points, 10.5 rebounds, and 10.5 assists in 10 games this February, which passed Wilt Chamberlain as the oldest to ever accomplish that.

Most points scored in a triple-double: James Harden (60)

Harden set a Houston Rockets franchise record when he dropped 60 points on Jan. 30, and he did it with 10 rebounds and 11 assists, too.

This might be the wildest one in this section, since Jokic tallied three statistical 10s in less than 15 minutes. The previous record had been set in 1955 by Jim Tucker, who still needed 17 minutes to accomplish it.

First player to record a triple-double with blocks on his birthday: Anthony Davis

Obviously, this is the most cherry-picked stat that has ever been cherry-picked. But that didn’t stop people from sharing it as a serious stat, so we feel like we must include it here.

Most consecutive games with 10-plus points: LeBron James (873)

James famously passed Michael Jordan this year, who had gone 866 games scoring double figures. This is a more impressive feat of James’ durability than anything else,

Most free-throw attempts in a quarter: Ben Simmons (24)

In the fourth quarter of an incredibly forgettable November game, Washington Wizards head coach Scott Brooks intentionally fouled Ben Simmons for an entire fourth quarter. It was disgusting. Simmons started 4-of-14, but finished 12-of-24 in the frame.

This isn’t totally fair since Booker didn’t actually make the most threes, but instead just benefitted from a new scoring system. But hey, records and records.

Most career franchises played for while scoring exactly one point: Scotty Hopson (2)

I wish Hopson the best and hope he gets an extended chance with someone soon, but this record is hilarious nonetheless. In the 2013-14 season, he played two games for the Cleveland Cavaliers and scored one point. This year, he suited up just once for the Dallas Mavericks and again scored … one point. (He’s 0-of-5 from the field and 2-of-4 from the line.) Those two points are his only two career points.

This is why teams should be scared of Philadelphia, no matter when Joel Embiid suits up in the first round.

Most losses by a team with a positive scoring differential: Charlotte Hornets (+21)

While this is a bizarre stat, it’s somewhat explainable: just look at Charlotte’s 61-point win over the tanking Memphis Grizzlies earlier this year.

From that 61-point blowout over Memphis m

entioned above: Walker scored 46 points that game before sitting down for the entire fourth quarter, finishing with 28 minutes played.

Most bowls of soup thrown at an assistant coach: J.R. Smith (1)

I mean … this one is hard to fact check, but I’d like to think it’s a record. 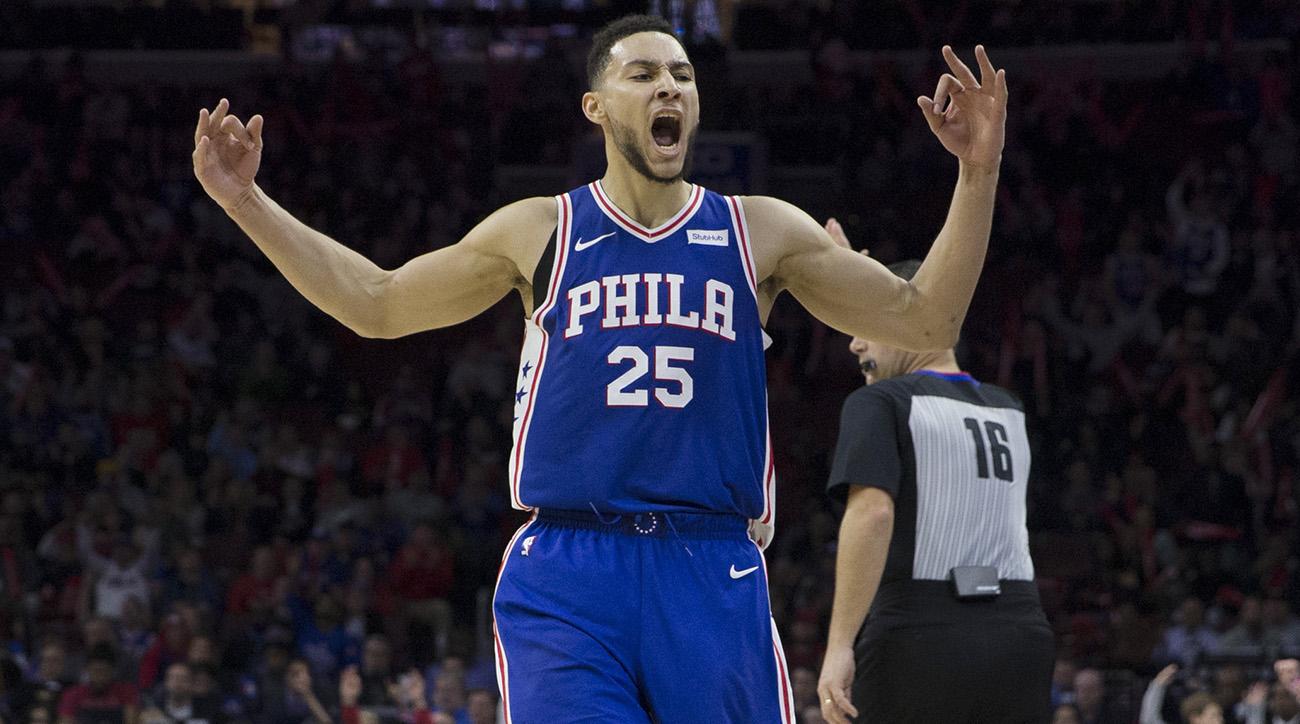 Dirk Nowitzki: first player to play 75-plus games in his 20th season

Most missed attempts without a make in a season opener: Stanley Johnson (13)

Johnson shot 0-of-13 from the field, including six missed triples. He did have two points (2-of-2 from the line) while playing 40 minutes, and still finished as a plus-six thanks to a solid effort on the other end. Still, it didn’t bode well for his season — Johnson shot under 40 percent from the field.

Watson only made it one week into the season before Phoenix decided they’d part ways with him, the earliest any head coaching firing has ever gone down.

First team to finish with the worst offense AND defense at the same time: Phoenix Suns

Look, having the most losses just means that you deserved to stick around long enough to accomplish it. This isn’t really a lowlight. Carter’s 664 is technically tied for second-place along with Johnny Newman, the leader coming into the year. But Carter has committed to another season, so he’ll surpass him officially then.

First player to average at least four turnovers for his career: Russell Westbrook

Westbrook’s completely involved playing style leads him to being a high turnover player, and his teams have accepted that. Oklahoma City was above average as a team this season in turning the ball over, and Westbrook was the only player who constantly coughed it up, relative to the rest of the league. Still, no qualifying player has ever gone over four turnovers per game until now. We have to mention it!

Most games missed due to injuries: more than 5,000

In Denver’s win-or-go-home regular season finale against Minnesota, Chandler played 48 minutes in the overtime thriller without scoring a single point.

I’m cherrypicking slightly — this has happened in two other instances, but both players (Horace Grant and Dennis Rodman) recorded significantly more rebounds. Chandler had just nine, while attempting three shots.

A term coined by FiveThirtyEight in this article, a Pareto Game is a game that includes statistical feats that have never been matched, typically referring to multiple categories.

No player has ever scored 60 points or more, 11 assists or more, and 10 rebounds or more. That’s the definition of a Pareto Game, even this one is a more extreme outlier due to Harden’s staggering statistical show.

While players have gone over 25 assists, they haven’t done it while also recording seven rebounds. Rondo stands alone there. (He also set a New Orleans franchise record with this stat.)

No player has ever scored 46 points, seven assists, and seven blocks, even forgetting the rebounds total.

While players have recorded 35 points and 17 assists, and we’ve seen individual games with more than 17 assists while still sitting at zero turnovers,

Thanks to one studious r/nba user, MainMendoza, we know that Julius Randle scored the 12,000,000th point in NBA history during a game in early February. The 12 million mark comes just about four years after the 11 millionth, and it has been eight years since the NBA registered its 10 millionth.